The North and South Arcades traverse the 395-foot length of the building.

19th century arcades were designed as indoor cities that distilled the thrill of shopping and excluded weather, dirt, mobs and transportation. Skylights brought the outside in safely. The Grove Arcade, one of the last built, used glass which absorbs infrared and ultraviolet radiation.

Spiral staircases were invented in the middle ages to make maximum use of space. The spiral staircase also uses one of the oldest symbols of spiritual progression in human history. Spirals represent cycles that both move forward in time and return to a beginning. Charles Parker used the staircases for effect — adding to the see-and-be-seen psychology of the Arcade — while reserving square footage for the all-important store rentals. Grotesques are a form of decorative sculpture often found in or on Gothic structures.

The term is used broadly for gargoyle, although traditionally a gargoyle serves as a drainage spout for rain water, while a grotesque can function solely as decoration. The term gargoyle is derived from the gurgling sound of water issuing from a spout. There are fifty grotesques flanking the North and South Arcades; these figures are ornamental, although you will see gargoyles along the exterior that do carry water.

Notice the grotesque with the protruding tongue just above the first set of spiral staircases. It was medieval practice to decorate column capitals and corbels of arches with grotesque heads. Architect Charles Parker ordered terra cotta casts of these figures from the Atlantic Terra Cotta Company in Staten Island, New York. He liked them so much that he created his own, and placed some in his home at the bases of exposed beams. After his death, his wife had them removed.

Parker combined many architectural styles in the Arcade.

The Arcade is lined with Royal Shields. Roman sculptural niches and medieval shields were found in the work of 17th century Italian architect Giovanni Bernini. Placing shields within sculptural niches was more the vogue in England, where they decorated gatehouses, colleges and guild halls for middle class claims on nobility.

In the Middle Ages, heraldry represented the formation of noble families into corporations, with the coat of arms relating to monograms and trademarks, and the licensing managed by heralds. The Arcade’s shields use a Renaissance shape and a quarterly division but are purely decorative. 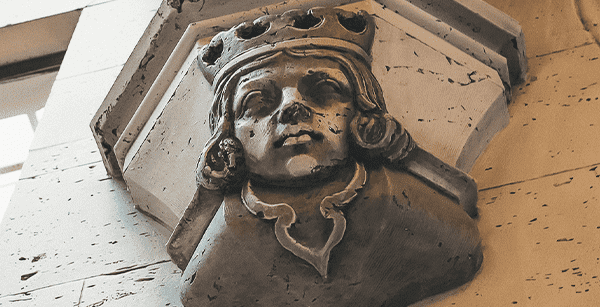 The imagery, spiral staircases, sloped floors, second level bridges and long vistas were designed to make shoppers feel that they are the kings and queens of what they survey.

Back to Exterior
Continue to Features