The tour begins outside of the Grove Arcade at the North Entrance, by the winged lions.

Across the street, Grove’s Battery Park Hotel was preserved on the outside, thanks to Federal tax credits, and was converted to apartments for the elderly in 1987. Built in 1922, the building was the first project in Grove’s attempt to re-make downtown Asheville. From an upstairs room, Grove oversaw the work of his masterpiece, the Arcade, before dying in 1927 with the project not yet complete. A proposed tower on the Arcade was never built.

Walk to the northeastern corner of the Arcade and look north to see the Basilica of Saint Lawrence, located to the right of Battery Park Apartments. The Basilica predates the removal of Battery Hill. Noted Spanish architect Rafael Guastavino designed the church in 1906, using his trademark system of building self-supporting domes with overlapping tile. The Basilica and the Arcade shared with the Biltmore Estate and the Grove Park Inn the employment of skilled European tradesmen. 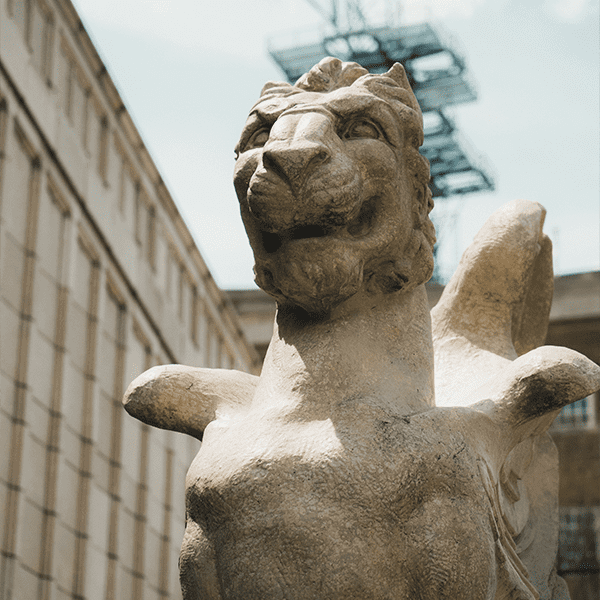 The winged lions the ramps and the Grove panel above the doors at the North Entrance establish the Arcade's orientation.

Grove was keenly aware of the interests of all potential users and benefactors, and made each of the four entrances prominent. The main entrance catered to tourists by facing the hotel. Mistakenly called griffins, the plaster winged lions announce the Arcade’s Palladian style. Palladio was an Italian Renaissance architect who created villas and palaces with classical proportions and colonnades. The frequent description of the Arcade’s style as “Gothic” refers to some of its ornament and its upward thrust.

The ramps on the exterior were designed by Charles N. Parker, the building's architect.

He tapped local imagery borrowing the ramp idea from the Biltmore Estate’s Rampe Douce, French for “gentle incline.” The ramps were designed to enable pedestrians — including mothers with strollers — to ascend to a roof garden that included a band shell. Step back to see the panels above the ramps which follow the Renaissance practice of honoring individual artisans.The one with the compass and scroll is Charles Parker, architect. Parker had moved to Asheville in 1904 at age 18 to work in the office of Architect Richard Sharp Smith, who supervised the construction of the Biltmore Estate and then established his own practice. Later, Parker designed houses in the Grove Park subdivision, and his flair landed him the Arcade job. At the West Entrance on O. Henry Avenue entrance, you will find an Arabesque metal screen.

It is one of the most pronounced expressions of the Arcade’s Venetian Gothic style. The pattern goes back to Mahometan trellises, carvings and tile work, which avoid graven images and celebrate geometry in nature. The exterior of the building is covered in terra cotta tiles. Terra cotta, fired clay, is an ancient material that had been revived in Renaissance Italy and then again in late 19th century America for its fireproofing and decorative qualities. Grove was a stickler about sanitation and fire prevention — like many progressives of his era who lived through urban epidemics and the Chicago fire of 1871. To protect steel frame construction, terra cotta was cheaper and lighter than stone.

The original conception of the Grove Arcade by Charles Parker included a 14-story tower — inspired by the Neo-Gothic style. Grove planned on putting offices, a hotel and a men’s club in the Arcade tower, reserving the roof garden around it for a public park strongly desired by community leaders. 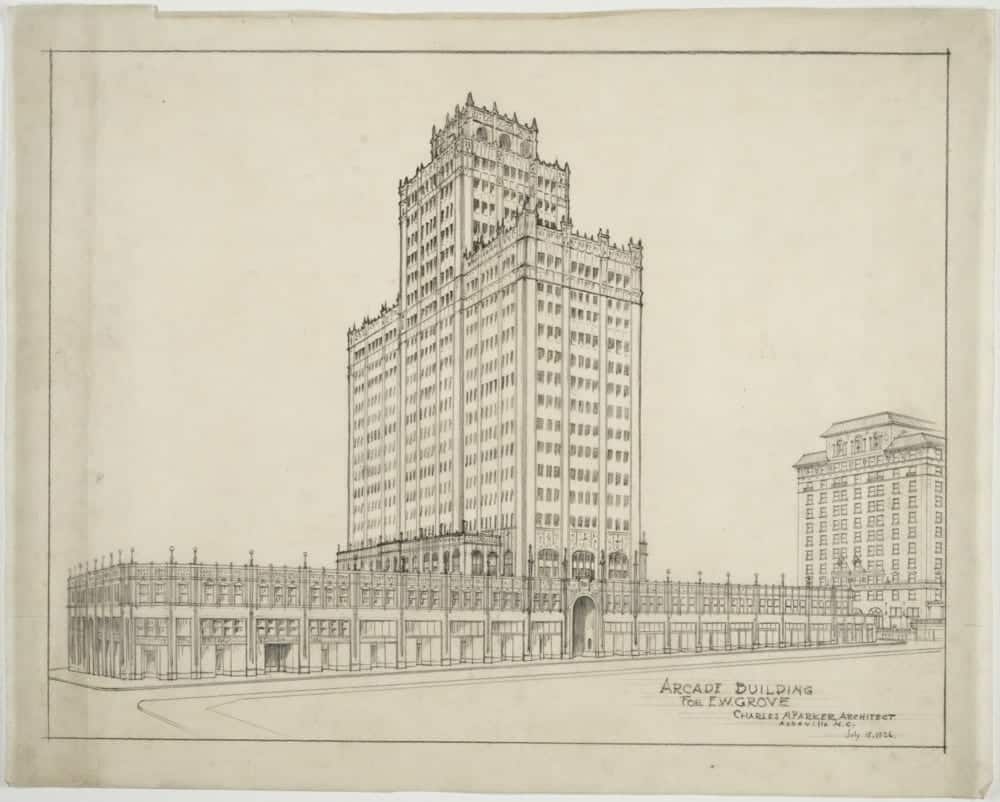 The Asheville Citizen-Times offices, across O. Henry Avenue, moved from Haywood Street in 1939.

Designed by Anthony Lord, it is the city’s prime example of the Art Moderne style, best appreciated inside. Glass block, the building’s unusual exterior material, let in natural light and provided insulation in the upper floors before heat absorbing glass had been available. On Battery Park, you will see a band of 88 gargoyle heads punctuating the exterior of the building.

The heads appear at the margins of each bay and rest on the band that wraps the Arcade. During the Renaissance, ancient Greek festival masks, adopted by classical drama and art, were incorporated into architectural patterns. The Arcade’s gargoyle repeat. There are four roof gargoyle that function as downspouts directing water away from the edifice.

In 1942, during World War II, the Federal Government took over Grove Arcade.

Asheville’s remote, mountain location enticed the US government to relocate the Postal Accounts Division to Grove Arcade. The windows were filled in with brick for security. It was not until 2002 that the large, iconic glass windows were restored after the city acquired the building from the Federal Government and leased it to the Grove Arcade Public Market Foundation. Grove Arcade was marketed as the "heart" of the city.

Notice the heart tracery that appears along the exterior parapet. The heart-shape is actually a floral symbol, relating to the ivy leaf — an evergreen was associated with eternal love in medieval times. The courtly meaning probably applies to the Arcade, as Asheville was awash in Sir Walter Scott romanticism. The English cottage style in Grove Park homes and in the Asheville community of Kenilworth, named and modeled after a Scott novel, reinforced this ideal. Romantic decoration on buildings — such as neo-Gothic tracery — died out in the 1930s, as modernism became the trend. Back to Tour Home
Continue to Interior